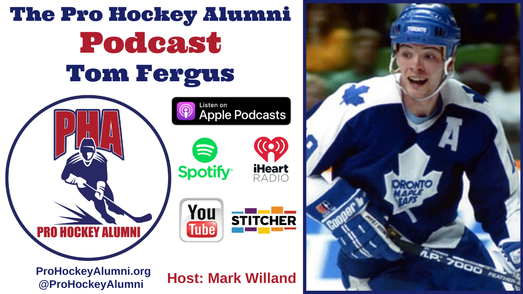 Episode 68 of the Pro Hockey Alumni Podcast features Tom Fergus, who played 726 NHL games with the Boston Bruins, Toronto Maple Leafs and Vancouver Canucks in the 1980s and early 90s..  Fergus was known for his sensational wrist shot, which helped him record back-to-back 30-goal seasons with Boston and Toronto en route to a total of 235 goals for his career.

Tom is entertaining and insightful as he recalls his longshot road to the NHL draft, his junior coach -- Mike Keenan, the much-publicized contract battle and eventual trade from Boston, and he provides great anecdotes about John Brophy, Pat Quinn, Terry O’Reilly, Wendel Clark, Borje Salmingand many other great names from that unforgettable era.
Today, Tom is very active with the Toronto Maple Leafs Alumni, raising money for various charities throughout Ontario and beyond.

Speaking of charities, just a reminder that we have joined NHL Alumni Tom Laidlaw, Frank Simonetti and Ken Hodge, Jr. in support of the Warrior for Life Fund and the Navy Seal Foundation.  Through the game of hockey, the Warrior for Life Fund supports our soldiers by providing programs and infrastructure that help military families cope with the unique challenges of combat, extended deployments, disabilities and the long lasting effects of war.

​Remember you can follow us anywhere online @prohockeyalumni -- and as always, we appreciate your outstanding ratings and reviews on ITunes and Apple Podcasts