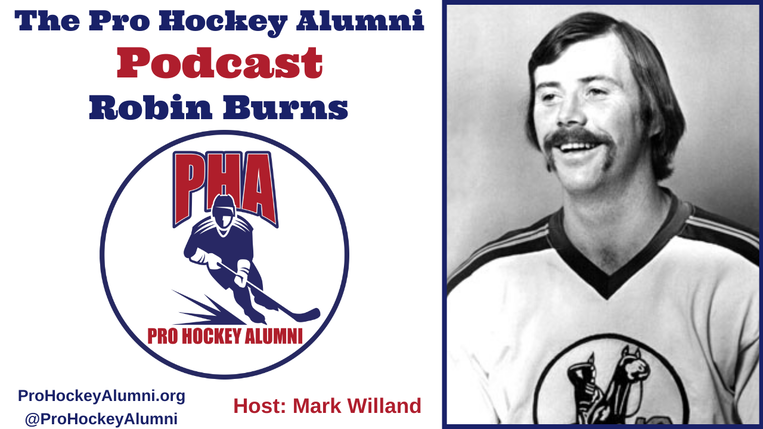 Episode 62 of the Pro Hockey Alumni Podcast features Robin Burns — one of the most entertaining and impactful people to ever play in the NHL.

As a left wing for the Pittsburgh Penguins and Kansas City Scouts in the 1970s, Burns was known as a fun guy, a natural comedian and the life of the party.  But Robin was also a visionary, who would eventually pioneer one of the most important hockey equipment innovations: the protective visor.

After rising to president of Micron skate company, Robin founded a long shot startup called ITECH in the basement of his Montreal home. ITECH would grow into one of the three biggest hockey companies in the world.

This was just one of many successful business endeavors for Robin, who,  in his spare time, would also become an agent for several NHL coaches, including his cousin Pat Burns.

We’ll follow Robin’s incredible journey from his youth in Montreal and the Montreal Junior Canadiens, to the American Southwest, Hershey, Pittsburgh and Kansas City and right through his inspirational rise to the top of the hockey business mountain.

Despite his entrepreneurial success, Robin remains a humble self-effacing guy and one of the best storytellers in hockey.

Inspiration for the Robin Burns episode courtesy of upcoming show guest Troy Treasure, author of "Icing on the Plains" ... "The Rough Ride of the NHL Kansas City Scouts."