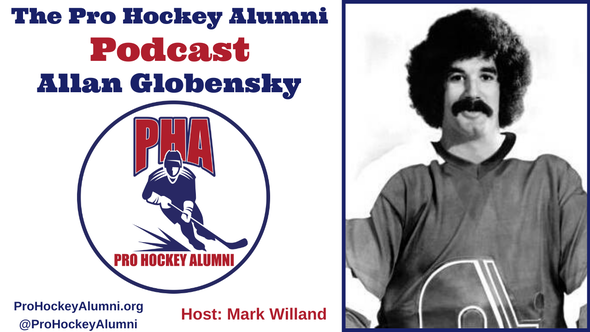 In an era that was as much about violence and mayhem as scoring and finesse,  Allan Globensky's battered fists were more valuable than his hockey stick.

Episode 64 of the Pro Hockey Alumni podcast features Allan Globensky, a feared enforcer with the WHA Quebec Nordiques in the 1970s.

In the early 70s, Globensky was a member of the incomparable Montreal Junior Canadiens, where her served as a popular and self-described goon on a Memorial Cup-winning squad that included Hall of Famer Gilbert Perreault and perennial NHL all-star Richard Martin.

Allan was Selected by Minnesota North Stars in the 1971 NHL Draft, and eventually signed with the Nordiques in the fledgling World Hockey Association. Incidentally, Allan’s first coach in Quebec was the legendary Maurice “Rocket” Richard and Allan shares some fascinating insights into this revered hockey legend.

With the Nordiques and their minor league affiliate in Lewiston, Maine, Globensky, was a reluctant gladiator who experienced the seamier side of hockey, a world of mayhem, bloodshed and insanity that made the iconic movie “Slapshot” tame by comparison.

We’ll talk about the wild brawls and the toe-to-toe matches with some of the 70s toughest players like Dave Hutchinson, Paul Stewart, Steve Durbano and many more.

Back then, Globensky fought because that’s what he was told to do, and it was the role the team wanted him to play. Allan is still battling, but now he’s fighting to maintain his quality of life and to encourage former teammates to seek help if they are concerned about their mental and physical health.
​
Allan’s new book  “A Little Knock Won’t Hurt Ya!” Is, easily, one of the best hockey books I’ve read and I highly recommend it. I call this fast-paced book "Slapshot with a Soul.” In this well-written memoir, Allen is brutally honest and refreshingly candid about the ups and downs of his life as a hockey enforcer and the dark days he experienced thereafter.
And’ I’ll give you a spoiler — this story has a happy ending.

So … What happened to Allan Globensky, the former cult hero, after the cheers of bloodthirsty fans faded away? This is his story, and it’s one that is both compelling and cautionary.​