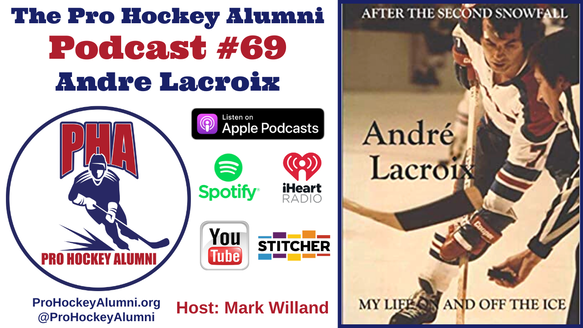 Episode 69 of the Pro Hockey Alumni Podcast features the return of one of our favorite guests -- WHA scoring king Andre Lacroix.  Andre has written his memoir -- “After the Second Snowfall”, which details his amazing hockey journey through pro hockey in the 1960s and 1970s and his fascinating life after hockey.

Andre, of course, was an original Philadelphia Flyer in NHL and a WHA pioneer in 1972..  By the mid 70s he had established himself as one of the premier players in either league.

Known as the “Magician” for his superb playmaking and stick handling skills, Andre also proved to be a skillful negotiator, playing for six WHA franchises without ever having been traded.

Post retirement, Andre has used his celebrity to bolster charitable organizations and eventually create his own foundation for those with special needs.

“After the Second Snowfall” is available now on Amazon.com.

In this episode, Andre and I discuss the process of writing this compelling book.  At the conclusion of that discussion, I’ll replay my original and entertaining 2018 interview with Andre from episode #9.
A thoughtful and transparent memoir, After the Second Snowfall explains how André Lacroix was a rebel in a rebel league by negotiating his own contracts (he never made a bad deal) and why he played for so many teams and only traded once. You will be privy to both the behind the scenes action (and drama) of 1970s hockey and travel with André through life beyond the game.

Considered by many to be the greatest player in the short history of the WHA, and arguably one of the top players in the game, André Lacroix never received the accolades that were showered upon his NHL contemporaries. Even though he did make his presence known as one of the original members of the Philadelphia Flyers, he was largely ignored by the NHL.
The all-time leading scorer in the WHA, Lacroix also bested many of his elite contemporaries in assists and is only one of four players in pro hockey to have more than 100 in one season. Who were the other three? Bobby Orr, Mario Lemieux, and Wayne Gretzky. Even before his time in the pros, André was tops in stats for the OHL leading it with a PPG of 2.64.Still, there is more behind the man than superb playmaking and stick handling skills.

​The popular player used his celebrity to bolster charitable organizations and eventually create his own foundation for those with special needs.
Order Book on Amazon